The coat of arms of the cathedral church of the Archdiocese of Cincinnati evokes its dedication to God in honor of Saint Peter in Chains. 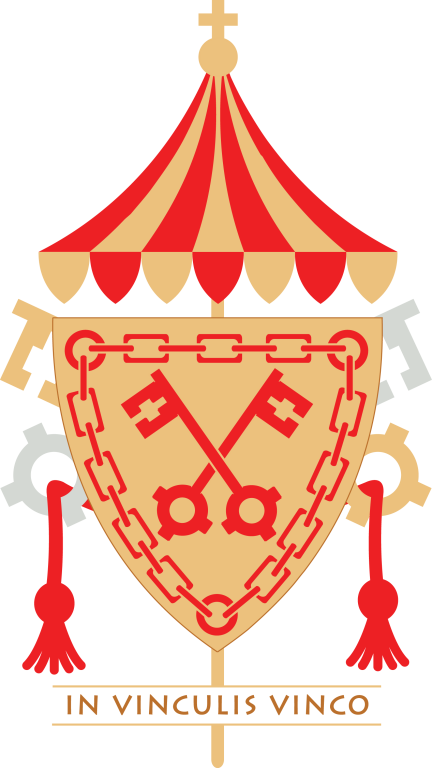 The crossed keys represent Saint Peter, alluding to the words of Jesus in Matthew 16:18-19: “You are Peter, and upon this rock I will build my church ... I will give you the keys to the kingdom of heaven.” The chains recall Peter’s imprisonments, first in Jerusalem (Acts 4, 5, and 12) and finally in Rome. Keys and chains are found as decorative motifs throughout the cathedral.

The colors of the arms, red and gold, are the ancient colors of the church of Rome, “the See of Peter,” and of the coat of arms of the Archdiocese of Cincinnati.

The red and gold processional canopy or ombrellino above the shield indicates that on June 29, 2020, the solemnity of Saints Peter and Paul, Pope Francis designated this historic church a “minor basilica.” The ombrellino is a canopy formerly carried over the pope, now used as an emblem of the Holy See and of churches honored with the title of “basilica,” a term originally used for the major churches of Rome.

The gold and silver keys crossed and joined by a red cord are one of the oldest heraldic emblems of the pope who, as successor of Saint Peter, holds the keys of authority to bind and loose on earth and in heaven (Matthew 16:19). Placed behind the shield of the cathedral, the keys indicate that the dignity of a minor basilica was conferred upon this church by the authority of the Holy See.

Below the shield is the motto of the cathedral: “In Vinculis Vinco,” “In chains, I conquer!” The motto expresses the confidence, inspired by the example of Saint Peter, that, even when bound with chains and condemned to death, in Christ we are victorious.