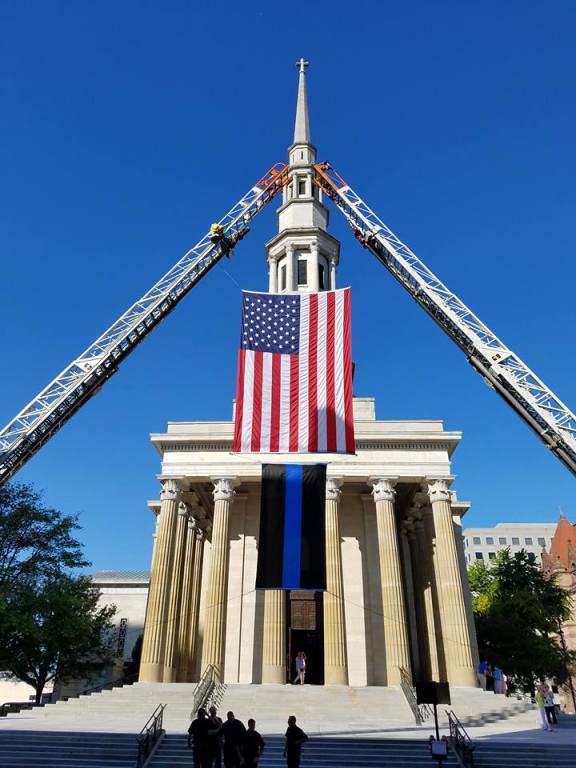 A Blue Mass is a Mass celebrated annually in the Catholic Church for those employed in the public safety field (i.e. police officers, firefighters, correctional officers, 911 operators and EMS personnel). The color blue relates to the blue-colored uniforms predominantly used by these services. The service honors those who have died in the line of duty and those currently serving as first responders. The Mass is an opportunity for the community to show gratitude to first responders and their families.

Though usually held in a Catholic church, the events are generally considered to be ecumenical or non-denominational.

The Blue Mass dates to September 29, 1934, when Reverend Thomas Dade started the service as part of his duties with the Catholic Police and Fireman’s Society. The first mass was held at St. Patrick’s Catholic Church in Washington, D.C. and has grown to a nationwide celebration. The September 29 service was timed to coincide with the feast of Saint Michael the Archangel, the patron saint of police officers and military.

St. Peter in Chains Cathedral has been hosting a Blue Mass in September since 2004. The next Blue Mass will be on Sunday, September 25, 2022. The Cincinnati Police Chaplain, Reverend Steve Angi, will preside. The National Anthem is sung at 10:45am on the plaza on Plum Street as folks gather for the blessing of the safety apparatus and vehicles. During Mass names of those who died in the previous year are read.

If you know any safety personnel, please invite them to show up in uniform and to bring their equipment with them for a blessing!