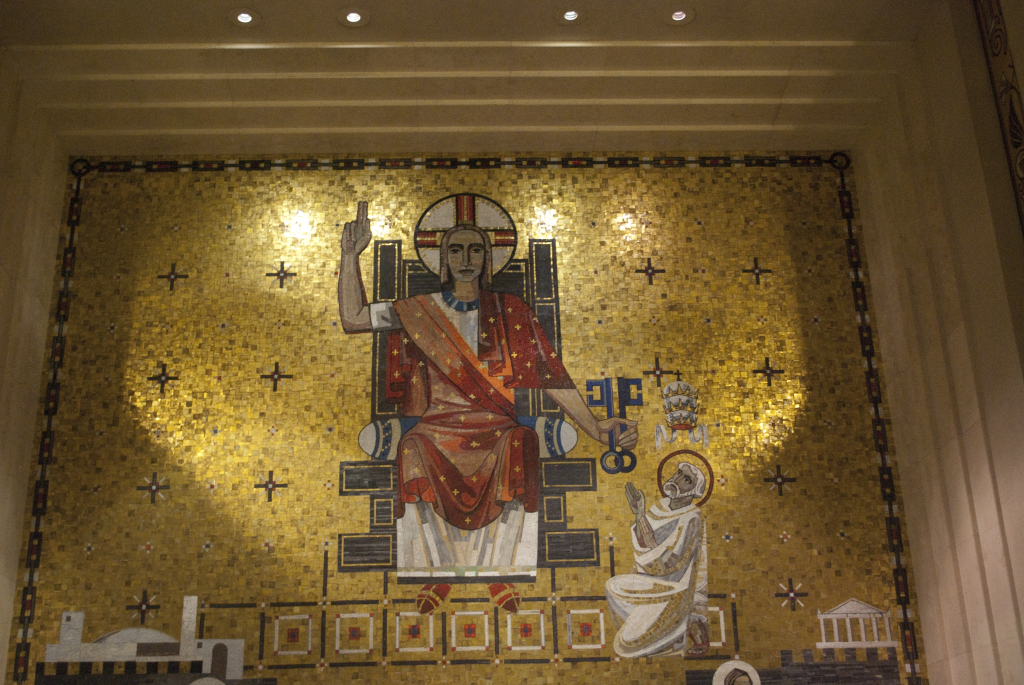 The Venetian glass mosaic which fills the rear wall of the sanctuary is the largest such work in the States, 35 feet high and about 40 feet wide.

Its design, based on the ideas of Archbishop Alter, was developed by Anton Wendling, a professor of the University of Aachen, Germany, and associate artist of the T.C. Esser Stained Glass and Mosaic Studios in Milwaukee.

The thousands of small pieces of stone and glass were produced and mounted in reverse on linen by highly skilled craftspeople in the United States and Germany. Under the supervision of master craftsman Erhard Stoettner, skilled craftspeople, brought from Germany under a special permit issued by the State Department, installed the mosaic in mortar on a masonry background.

Stoettner described the mosaic in a commemorative booklet published by the Catholic Telegraph at the time of the Cathedral's rededication in 1957.

As one enters the Cathedral, one is awed by the vision of a majestic wall of gold mosaic dominated by a heroic concept of the figure of Christ seated on a throne. His garment is resplendent in various shades of rich rubies embellished with gold stars, symbolic of Christ's burning love and sacrifice for the salvation of men. Here is a youthful Christ, his youth indicating that the Church is ever vital and unchanging amid the changes of time. He extends His right hand in blessing. With His left hand, He gives the keys of authority to Saint Peter who kneels before Him. The Saint's figure is surmounted by a tiara, symbolic of the papacy.

To the left, below the figure of Christ, the mosaic portrays the miraculous release of Saint Peter from the prison in Jerusalem. His deliverer, an angel, loosed his chains and led Him to freedom. In the opposite corner, the mosaic again portrays a prison scene, showing Saint Paul, the great preacher and symbol of the Church Militant, visiting Saint Peter in the Mamertine prison in Rome.

The panel shows the two Apostles strengthening one another spiritually before going to their martyrdom. Both the prison scenes are surmounted by architectural elements symbolic of the cities in which Saint Peter was imprisoned. In the center, below the figure of Christ, a Latin text is inscribed: Et Petrus Quidem Se,vabatur in Carcere Vinctus Catenis which translates: And Peter was kept in prison, bound in chains. (Acts 12:5)